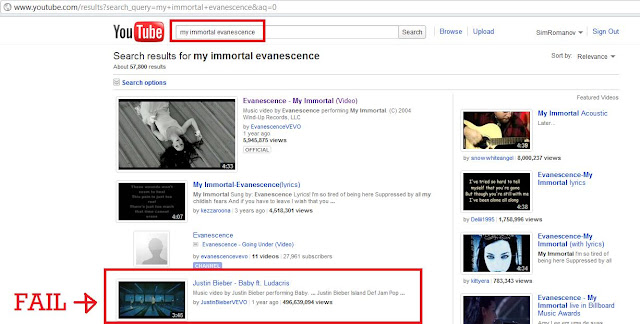 No word in that search relates to Bieber so directly in anyway.

I included the song name and even the band name, so surely before getting results about Justin Bieber I should be getting other songs by that band.

My Brain hurts from all this fail.

Maybe there is a reasonable explanation, If so someone please tell it to me...

Getting a Green Card to go to USA

Have ads really become this cheap and stupid...

Bieber Fever and The Black Plague

People will write history books about this stuff

I have to say though Rebbecca black isn't the first to state obvious things in song, and at least she got the days of the week in the right order, I mean we all remember in the Fergalicious song when they spelled 'Tasty' wrong...
-_-

Watch them. Because I say so. 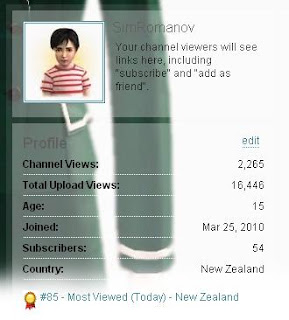 I got as high as 72, but thats no big achievement being from such a small country its easy.
But an honor is an honor all the same. And I do plan on disappearing again after SIFF but who knows I'm so bored all the time. Im just trying to say don't get used to me posting.
Posted by SR at 8:33 PM No comments:

I have been trying to keep a clean break from the sims world, but its very very hard, turns out i liked you all a lot more than I had realized, anywhozzzle I'm not returning (so don't get the wrong idea about my blog being open again)

The blog is open because, upon reflection, there is a small amount of cc here, not that its great cc, but particularly the keyblades, because thats something I searched for ages for and never found, and I suppose it would be disappointing to find that there were such things for ts3 and then all the links to be hidden away in a private blog.

I tried to make a clean break from everything because at the moment I have a lot to think about in regards life, and where I'm going and what I will do in life, all that stuff  that everybody faces at some stage in life. My attempts at getting everything all good and focused have totally failed, and have probably put me in a worse situation than I was prior. But don't worry about me, really its ok. Everything is relatively good, I mean just turn on the news and its easy to get a dose of perspective, it makes everything which we sometimes feel to be insurmountable problems into complete silliness.
I really ruin my own plan and resolve, because I have been lurking .. like a lot, which therefore defeats my attempt at a clean break, but as I said its hard to stay away from you guys especially when my plan which first required leaving totally fails, it felt like a one step forward two steps back kinda thing. I feel annoyed with myself that I've not been able to stick to my resolve, I feel like one of those people who signs up for "Weight Watchers" and in a matter of days finds themselves in the 'McDonald's drive thru'

I probably sound like I'm talking in code and few if any will get the full meaning of what I'm saying.

I'm about to jump into a very complicated illustration and I hope that you are following:

Its like life is like a game of monopoly, and Ive been sitting in jail and decided I want to land on free parking so I pay the fine to get out, (one step forward) but then end up landing on someones hotel, (two steps back) and now I am running out of money and am not sure what to do next.

Which has brought me here to this blog writing this...

I'm not even sure If I'm going to publish this or if its just helping me think things through...

If after reading this you are left with the same feeling you had when trying to understand the plot of the T.V. show "Lost" then ignore this and move on, If you do understand then,
*American Accent*
CONGRATULATIONS ITS A BRAND NEW CAR!
and it can all be yours if the price is right!


In my absence I have no idea what happens to the visitor count but for me its sitting at around 330,000, which is way off considering there have been no visitors in the last 2 weeks or so, with the exception of one visitor from Germany which I cannot explain.

I'm still trying to stay away though, but you people make it hard with your uncanny powers... 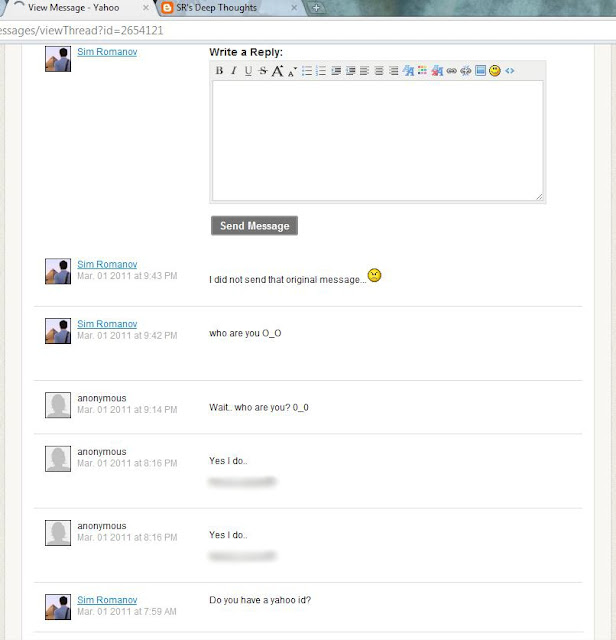 So I was on WEBS, Simatography to be specific and it says I have a message so I check it and find the lowest 4 message, I then posted the top 2. But I never asked anyone if they have a yahoo id, so I have no idea whats going on, I changed my password just in case, but weird...(the blurred part is the persons Yahoo id)
Posted by SR at 6:50 PM 2 comments:

I'm SimRomanov, but just call me SR. I'm a long time simmer and occasional cc maker. In real life I'm 24 and I live in New Zealand.
Hit me up on twitter @SimRomanov